Hello, I’m Eshé the lady behind the blog. That’s me cooking on the set of The Hairy Bikers. I LOVE food and I don’t mean I really like it. I mean my whole world revolves around it. 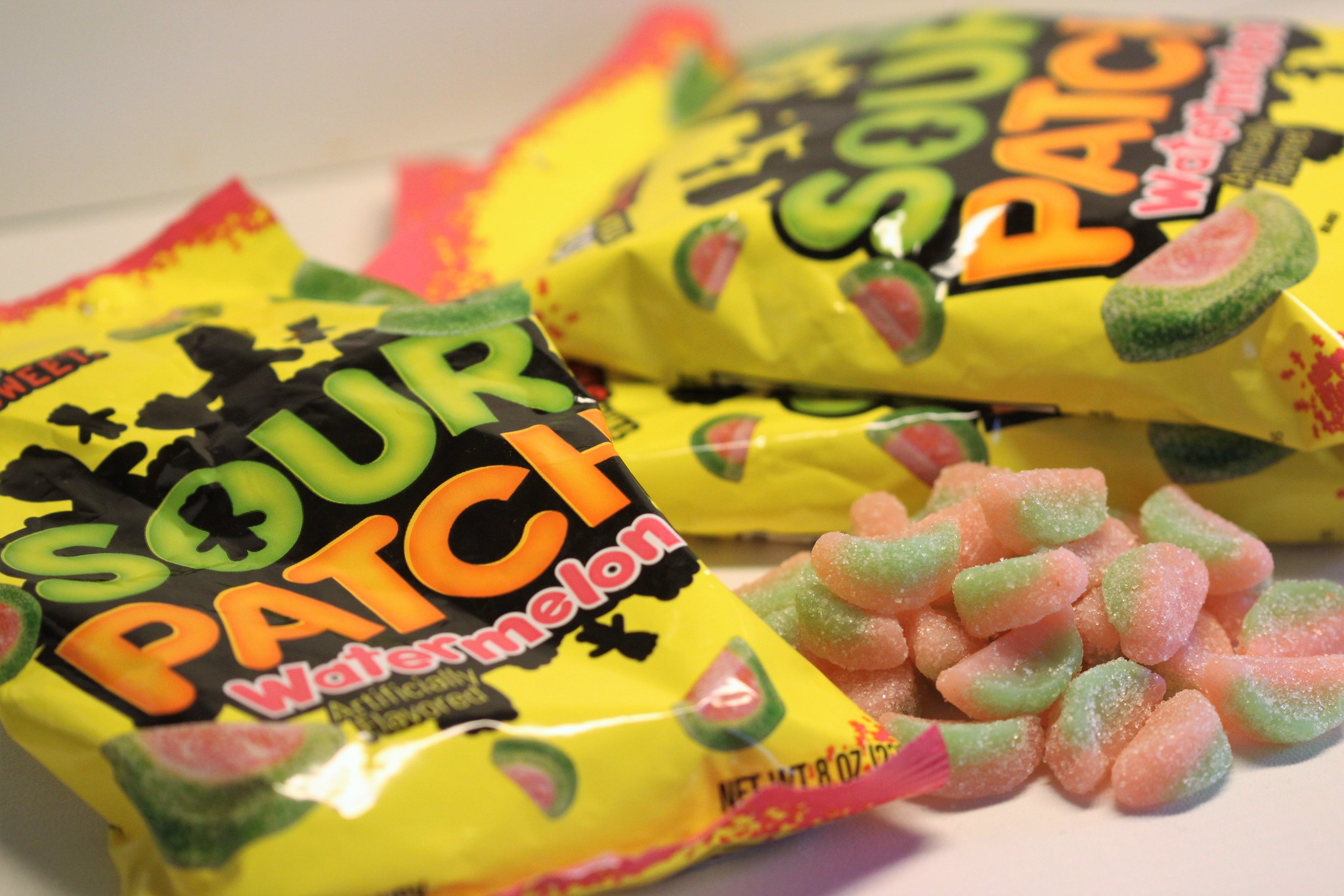 Sour patch kids are a popular candy having a sweet center with a sour coating. Due to its unique sweet and tangy taste, sour patch vegan is one of the most liked chewing candies worldwide.

This candy is available in various flavors like lime, orange, mango, raspberry, etc. However, the most popular flavor is blueberry.

According to some people, sour patch kids contain some animal-derived ingredients that make the vegan community curious to know whether these gummies are vegan or not.

Well, that’s true. Sour patch kids are non-vegan. Apparently, these gummies do not contain gelatin or any other animal-derived ingredient but still, they are not classified as a vegan treat because of some ingredients like sugar, artificial flavors & colors, which are still controversial.

Furthermore, we’ll share about the varieties of sour patch kids and some vegan candy alternatives.

If you are interested to learn more about sour patch kids, keep reading the article below. Let’s have a look

What are sour patch kids?

Sour patch kids are chewing candies with a sweet center and a tart tangy coating outside.

This candy is available in several yummy flavors like raspberry, lime, pineapple, strawberry, orange, and mango. Also, it comes in a watermelon shape and taste.

However, the most liked flavor is blue raspberry because of its high demand among kids and adults.

Moreover, the sour patch kids are available in some exciting variants such as fire and chillers.

What are the ingredients of sour patch kids?

To determine whether the sour patch kids are vegan or not, the ingredients that are used to make this versatile chewing candy are listed below;

All these ingredients are vegan-friendly because they are derived from plant sources instead of animals.

However, some ingredients like sugar, natural and artificial flavors and chewy texture are still controversial because different manufacturing companies use different components to make this tasty snack.

No, sour patch kids don’t contain gelatin instead, many manufacturing companies use sugar and cornstarch to give the candy a chewy texture.

Gelatin is made by boiling the skin, tendons, and ligaments of cows and pigs which makes it a non-vegan product. So, many sour patch companies worldwide use alternative methods to give the candy a chewy texture.

However, there are still some manufacturing companies that use gelatin as the main ingredient for making sour patch kids.

No, sour patch kids are not completely vegan. This candy apparently, doesn’t contain Gelatin or any animal-derived ingredients. However, it is still not vegan-friendly.

Ingredients like sugar, artificial and natural flavors, colors, etc that are used to make sour patch kids are not 100% plant-derived.

Like other naturally derived ingredients, glycerin is derived from plant sources. So, it is vegan-friendly.

Glycerin gives sour punch straws a perfectly soft and chewy texture which makes them an ideal snack for kids and adults.

Unsurprisingly, titanium dioxide gives the candy a smooth, soft texture and enhances the storage period of these sweet gummies.

According to some people, the artificial color, flavor, and sugar used to make these gummies are not 100% plant-derived ingredients.

Here are some ingredients of sour patch kids that makes this candy non-vegan;

Gelatin is made from tendons, ligaments, and the skin of animals like cows and pigs which makes it a non-vegan product.

While buying a product, vegans search for the ingredients, and if it contains gelatin, they refuse to buy it, especially when purchasing puddings, jellies, candies, etc.

If we stick to the topic, gelatin is not an ingredient for sour patch kids. Many vegan companies use cornstarch and corn syrups to produce the chewy texture of the candy.

However, different companies manufacture sour patch kids worldwide and use different ingredients for making the candy. So, we can’t say that they do not include gelatin.

Some vegans claim that sugar is a non-vegan ingredient because companies prefer to use bone char in the sugar refining process.

That’s why they classified sour patch kids as non-vegan-friendly candies because sugar is a major ingredient that is used for making candies.

That’s not 100% true because companies use inverted sugar to make candies, which is a combination of dextrose and fructose. So, gummies made from inverted sugar are vegan.

Most companies use artificial flavors and colors to give these candies a yummy taste.

The artificial colors are tested on animals to see whether they cause any health issues. If these colors are not suitable for health, tumors appear in animals, and they die.

Due to the testing of color on animals, vegans consider sour patch kids a non-vegan product.

Some vegans love to eat sour patch kids despite its controversial ingredients because of its unique flavor, sweet and tangy taste, and chewy texture.

Secondly, there is no animal-derived ingredient in sour patch kids, which is a prominent reason why vegans eat this candy.

Is the sugar used in sour patch kids vegan friendly?

It varies significantly because some companies use a cane sugar and beet mixture to give sour patch kids a sweet taste. However, some use sugar which contains bone char which is not a vegan-friendly product.

Therefore, it is pretty difficult to decide whether the sugar used in sour patch kids is vegan-friendly or not.

Sour patch kids are halal by nature because they contain sugar, acids, cane syrup, and other plant-derived ingredients. There are no alcoholic or animal-derived ingredients in these candies, so you can eat them without any hesitation.

What are the alternatives to sour patch kids?

If you are very conscious about the ingredients used in sour patch kids, you can choose many vegan-friendly alternatives.

What are the varieties of sour patch kids?

The varieties of sour patch kids that are extremely popular are as follows;

Apart from all these exciting flavors of sour patch kids, blue raspberry is the most delicious and common one among kids.

Can you make sour patch kids at home?

Yeah, you can make healthy sour patches at home. Take ingredients like sugar, citrus fruits, and citric acid and make a mixture.

Pour the mixture into a baking pan and use different shapers to make some exciting shapes for your candy. Enjoy it after sprinkling some sugar.

Moreover, this sweet, tangy candy is a healthy way to satisfy kids’ cravings and add vitamins to their diet.

Can you eat gum instead of eating sour patch kids?

Yes, you can eat gum instead of eating sour patch kids. Chewing gum can reduce the risks of cavities and reduce acidity in the mouth. Moreover, it can destroy the bacteria in the mouth to lower the chances of illness.

Sour patch kids are flavourful gummies with a soft, sweet center and a sour coating. This chewing candy is popular among children and adults.

This tasty candy is available in several flavors so you can enjoy your favorite one. The best flavor is blue raspberry.

However, if you are not comfortable with this delight’s ingredients, you can buy other healthy alternatives from the market.

When Must a Knife Be Cleaned And Sanitized?

How To Reheat Alfredo Pasta?